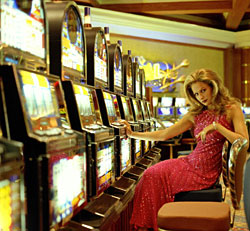 In order to be able to make head or tail of slot machines and slot games, every gambler should first get acquainted with the slots glossary and its major terms. Slots glossary is the first source that is used to assist the newcomers and experienced gamers, as well, to make clear some facts about slots and slots game aspects.

Let us consider some of the major slots glossary terms in particular.

Bank is considered to be the slot machines row. Thus, machines that are in the bank may offer the similar or quite the same gaming style.

The empty place between the two symbols on the slot machine is called blank. This spinning result also is called the ghost and is quite common phenomenon.

It is considered to be the extra game offered or additional spin that as a rule is added to the winnings.

These are the slot machines that may offer the higher jackpots ion the case of the gamer bets the maximum coins. These are also known as the jackpot slots.

This is the other name of the bank of the slots that are arranged in the oval formation.

This is considered to be the person who works at casino and provides the change to the slot gamers.

It is considered to be the min coins amount that the slots are sure to take. For, example, there are penny slots, while there can be quarter slots, as well.

Comps are known to be rewards for the slots gamblers like, for instance, souvenirs, free buffets, sometimes free rooms at a hotel! Traditionally, the higher and more often the gamer bets, the faster the accumulation of the comp points takes place.

Drop box is the special container for extra coins collection from the hopper inside the slots machine.

Hit is going to be the slang word to de4fine the winning.

It is considered to be the special coin area that is designed to separate the coin size for payout and pick up purposes.

Each of the slots has the particular money amount that is to be paid to activate the slots game and get an opportunity to win the bonus or jackpot.

It is going to be the percentage of the cash the slot machine pays to the players back.

Pay line is the line in slots that can tell the gamer what particular symbols are matched into the winning combination the gamer has just gained. Pay table is sure to explain the player the winnings.

Repayment percentage of the time when the certain winning reels spin appears.

Pay table is the term in slots glossary that defines the chart of winning images that payout and also how much money they repay for the combinations the gamer can match.