When it comes to gambling, all of us are familiar with examples from the Old West, with many Western movies featuring a card game being disrupted by a shoot-out. With Six Shot Showdown, lovers of slots games will have the chance to experience some of the thrills of an Old West shoot-out, and win some great prizes in the process. 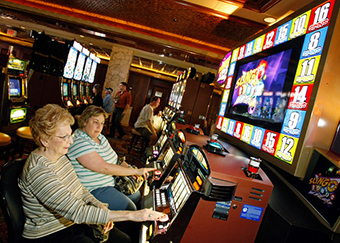 The theme of the game will really appeal to anyone who enjoys being taken out of their normal environment for a little while. The graphics really are something special, allowing any player to really immerse themselves in the dusty, dangerous world of the West. This is as close as online slots games get to being in a real shoot-out. There are five reels of action, with 20 playlines offering some intriguing gaming combinations.

The symbols that the game utilises stay faithful to the Wild West theme of the game. Gamers can go hunting for sheriff's badges, saloon bar girls and a whole host of other wild symbols. These symbols open up different areas of the game for players, with the scatter feature being especially useful for anyone who is after the big prizes. If a player is lucky enough to snare three or more of the scatter symbols, then they trigger the shoot-out feature. This aspect of the game is perhaps the most exciting feature it possesses, and it is well worth spending some time playing the game just to see what this component of the game offers.

Anyone who enjoys playing free slots will enjoy entering the shoot-out phase. Here, a the screen makes a swift transition to a shoot-out scene, with a gun-toting opponent shown ready and waiting for the player to try and make his draw. The player must first indicate where he wants to shoot his or her opponent. Should the shot miss, then the opponent is given a chance to fire back. Unfortunately, this means that he will win the shoot-out, so making that first shot count is crucial. The player still collects their accumulated prizes, though. If the player manages to hit the opponent, killing him, then a big prize is awarded. A non-fatal shot also awards a prize, and the player is given more chances to kill the opponent. Once one opponent is dispatched, another appears, with the player able to win prizes by facing up to four shooters before returning to normal spinning.

This aspect of the game really makes it an all-round winner. Some bonus slot games are so formulaic in their themes and designs that there really is little material difference between them. This game, in contrast, as such entertaining bonus screens that it really stands out from its competitors. For people who play 3D slots for the prizes, the graphics and theme of this game might not be that important. Whatever a player's views on immersing themselves in a fantasy world, though, all gamers enjoy winning prizes, and there is plenty of opportunity to do just that in Six Shot Showdown. The game uses RTG custom software to run, with the minimum bet being $0.25. Players can place a maximum bet of $125, meaning that some seriously large winning pots can be claimed. A random progressive jackpot makes the winnings potentially even bigger, too as this clip on YouTube will reveal.

If you have enjoyed this slot review, then more great reviews of the best slots games out there are available at Slots.com. There, anyone can find the lowdown on great games like Six Shot Showdown. So if you have a hankering to don a ten gallon hat, a poncho and a gun belt, but cannot find the time or the opportunity, this slots game could be just right for you. The exciting bonus screens make a solid game a really good one, in this case, and offer a level of challenge and excitement which other examples such as those from Zynga, similar in structure and narrative, often fail to match.