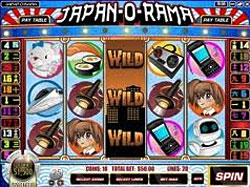 Slots are considered to be known worldwide. Japan is not an exception. This country has the slots games, as well; however, they are called in Japanese pachinko or pachisuro.

Slot machines in Japan are considered to be relatively new phenomena, though they are already popular among local gamblers.

In spite of the great varieties of the Japanese slots, in Japan there are particular regulations and rules regarding their utilization ruled by the National Police Agency. The restrictions are considered to be quite exact and strict.

For example, there should be 3 reels in Japanese slots. In addition, the reels of Japanese slots must be supplied with the buttons that are to stop these reels. Moreover, the reels cannot spin with the speed faster than eighty spins per 1 minute. Finally, the reels must be stopped within exactly 0.19 seconds after the press of the button.

In addition, though the 15 coins may seem to be ridiculously low payout, the slots gambling regulations may allow Big Bonus that is approximately 400-711 coins, and also Regular Bonus mode that is 110 coins. Here the 15 coin payouts may occur almost continuously, till bonus mode is considered finished. In the case slots machine is currently in the bonus mode, the gamer is going to be entertained by means of the special rewarding scenes that are depicted on LCD display. In addition, the kind of energizing music can be heard during the payout conduct.

Among the other interesting features of the Japanese slots there is the specific feature called Renchan. In English it means Stock. The point is that on many slot machines, if enough cash to get the bonus is going to be taken in, the bonus however may not immediately be awarded. For example, when the gamer is going to fail to hit the bonus in the process of the stand by slots games, it is sure to be added into the "Stock" for later on collection. A lot of current Japanese slots games, after finishing the bonus rounds, may set the probabilities of additional stock release. Thus, for instance, as a result, a very lucky gamer may probably get several rounds with bonuses in a particular row - Renchan, in such a way making 5 hundred or even 10 hundred coins of payouts quite possible.

Thus, it is significant about the Japanese slots that due to the Stock feature, it is considered quite possible to make lump sum of money simply by means of playing slot machines where some other gamers have just lost money.